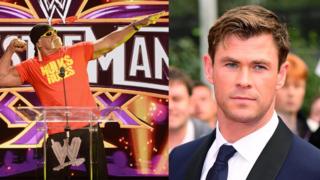 Avengers: Endgame star Chris Hemsworth will take on the role of WWE wrestling royalty Hulk Hogan in a new film for Netflix.

According to the Hollywood Reporter, Hemsworth will produce the film along with his Avengers co-star Bradley Cooper - yes, Thor and Rocket are producing a film together!

Hogan is one of the biggest names in wrestling of all time.

He started his career in the late 1970s in Florida. By the end of the 1980s, he was a huge star, appearing on magazine covers, TV chat shows and he was even the face of a cartoon on Saturday morning TV.

Hogan was inducted into the WWE Hall of Fame in 2005 by actor and director Sylvester Stallone and has made appearances for the WWE across the last five decades.

We want your questions for Hugh Jackman

What we know about Frozen 2 so far

But in 2015, WWE cut ties with the wrestling star - whose real name is Terry Bollea - after news of him using offensive language in the past emerged.

In a statement to People magazine he said: "Eight years ago, I used offensive language during a conversation. It was unacceptable for me to have used that offensive language. There is no excuse for it and I apologise for having done it."

Three years later - in July 2018 - the organisation welcomed him back. It said he deserved a second chance after making "numerous apologies and working with young people, where he is helping them learn from his mistake".

The new film will not focus on controversies, though. It will be about his meteoric rise to wrestling stardom and glory years of the 1980s - an "origin story of the Hulkster and Hulkamania".

Ariana has broken another massive record

This entry is now closed for comments.

2 comments
Back to top
unknown

Why parents will soon have more control over kids' TikTok accounts

Storm Dennis: Could there be more floods to come?